In gastroenterology and beyond, virtual reality (VR) is beginning to augment traditional therapies, including those intended to alleviate pain and anxiety.

Brennan Spiegel, MD, director of Health Services Research at Cedars-Sinai Medical Center in Los Angeles, told Medscape Medical News, “There are now over 200 hospitals around the US using VR in some way, shape, or form. We hope that will grow significantly in time.”

”We’ll be hearing more and more about this,” Spiegel said.

Spiegel, who is coeditor-in-chief of the American Journal of Gastroenterology, spoke at the Advances in Inflammatory Bowel (AIBD) 2020 Annual Meeting.

He said more than 3000 patients at Cedars Sinai have used VR as part of their clinical care. Patients can swim with dolphins, explore foreign lands in a helicopter, or laze on a beach in Hawaii while enduring painful procedures, conditions, or flares. A study from July of 2020, for example, shows patients were pleasantly distracted during colonoscopy. 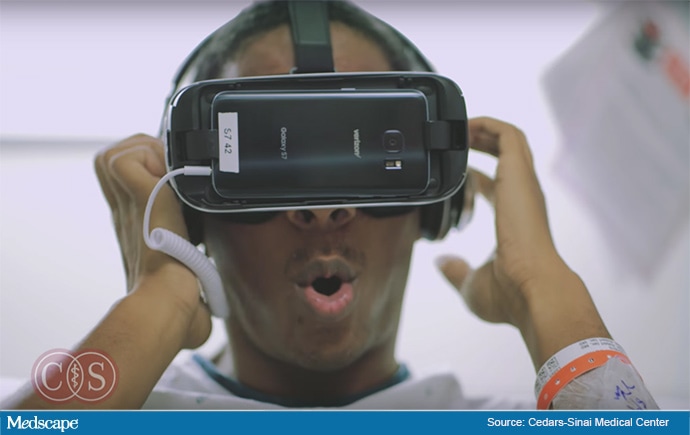 A young patient hospitalized with severe pain was being treated with high-dose opioids and other analgesics. At this moment, he’s flying in a helicopter over fjords in Iceland. Photo courtesy of Cedars-Sinai Medical Center

“VR is a tool that can profoundly modify perception of the world around us and the world within us,” he said. “If we use it properly and responsibly to recalibrate unhealthy perceptions, VR can become a radical new therapy to improve quality of life for some of our patients.”

The US Food and Drug Administration is on board with recognizing medical uses for virtual reality, which the agency calls Medical Extended Reality or MXR. The agency held a public workshop on the topic in March.

Spiegel and coinvestigators found that VR can ease pain in childbirth, which may have implications for women who want a natural birth.

In another study, burn patients reported up to 50% reductions in pain while distracted from wound care with immersive VR.

Augmented reality was also shown to change perception of satiety and control food consumption by changing the perceived size of food. That use may have implications for altering eating behaviors, Spiegel noted.

Steven Hanauer, MD, from the Feinstein School of Medicine at Northwestern University in Chicago, called Spiegel’s presentation “phenomenal” and the technology “potentially transformative.”

He told Medscape Medical News that although there is much potential, especially as an adjunct to cognitive behavioral therapy (CBT), there are questions to be researched and “we are very early in development.”

At the AIBD meeting he asked Spiegel about potential harms, particularly around use in young patients.

Spiegel replied, “There are concerns, particularly for kids under the age of 12 or so, because firstly they can create false memories; they literally feel that they have done what they did. Usually that’s around 8 years old.”

As to whether there are worries about screen time and addiction, he said, “We’re not thankfully seeing evidence of VR addiction, mostly because people get a little dizzy and vertiginous if they’re in it too long.”

Advances in technology, portability of the hardware, and reduction in cost are fueling the increased use of VR in medical settings.

Spiegel said one of the most popular headsets they recommend costs about $300. At Cedars, headsets are reused after undergoing extensive cleaning procedures that include ultraviolet light. Software modules for the headsets, some available by prescription, some publicly available, range from $2 to $20, he said.

His website refers to a directory of international VR providers and his team’s favorite VR software programs. Spiegel said he has no financial relationships with any of the companies.

VR can also improve general satisfaction for patients isolated in a sterile hospital room. Spiegel explains that VR can transport patients confined to their beds to fantastical destinations, such as safari adventures or exploring ice caves.

“We have an NIH grant for that right now looking at musculoskeletal pain using an 8-week, home-based CBT treatment program. It’s like having a pain psychologist at home with you, but in VR.”

Patients wear the headsets at home for a daily class via VR. “Frankly, we don’t have enough bandwidth to provide enough pain psychologists to everyone who has pain, whether IBD or otherwise,” he said.

The goal of VR is not to offer merely momentary relief, he said. “We don’t want people living in VR,” he said. “We want them learning something in VR that they can take with them, that they can then use in their real life,” such as mind–body medicine or breathing techniques.

More work is being done in the gastroenterology arena, he said. “We’re creating an IBS VR therapeutic right now at Cedars and hopefully we’ll have longer-term data this time next year,” he said.

Cedars is also on the brink of launching a new VR clinic, which will be run by a psychiatrist who specializes in behavioral health.

Spiegel and Hanauer have disclosed no relevant financial relationships..

Marcia Frellick is a freelance journalist based in Chicago . She has previously written for the Chicago Tribune, Science News, and Nurse.com, and was an editor at the Chicago Sun-Times, the Cincinnati Enquirer, and the St. Cloud ( Minnesota ) Times. Follow her on Twitter at @mfrellick