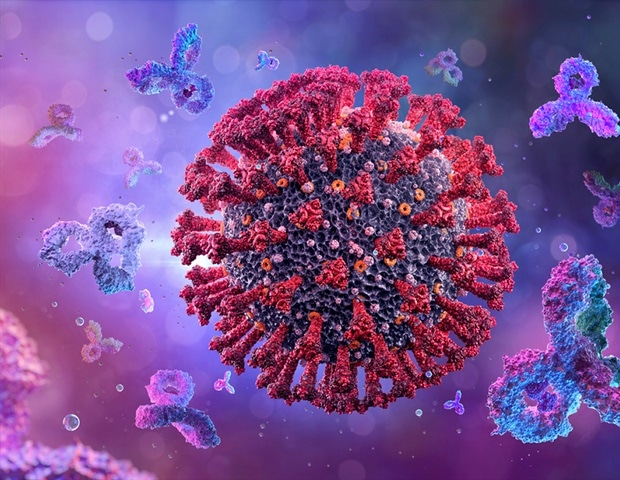 Researchers at the University of Washington in Seattle have conducted a study suggesting that infection with severe acute respiratory syndrome coronavirus 2 (SARS-CoV-2) can directly infect heart tissue and contribute to whole-organ cardiac dysfunction.

“These results support the hypothesis that independent of inflammation or coagulopathy, SARS-CoV-2 can cause direct functional heart damage,” writes the team.

The researchers say that as well as efforts to control systemic inflammation in patients with coronavirus disease 2019 (COVID-19), the use of antiviral or cardioactive drugs should also be considered to help prevent long-term cardiovascular complications.

A pre-print version of the paper is available on the bioRxiv* server, while the article undergoes peer review.

Since the first cases of COVID-19 were first identified in Wuhan, China, late last year, the rapid spread of SARS-CoV-2 has led to a pandemic where more than 25 million people globally have now been infected, and more than 848,000 have died.

Although COVID-19 is primarily regarded as a respiratory illness, it can involve the cardiovascular system and worsen pre-existing problems, as well as causing new ones to develop.

The adverse cardiovascular effects are significantly contributing to increased mortality among COVID-19 patients, yet so far, the underlying mechanisms of cardiac involvement are not yet clear, say Murry and team.

Following infection with SARS-CoV-2, the immune system can launch an excessive uncontrolled release of inflammatory cytokines that can exacerbate existing cardiovascular problems and even cause heart failure. Furthermore, COVID-19 is associated with the development of coagulopathies that can also damage the heart.

On the other hand, SARS-CoV-2 might directly cause heart damage after entering cardiomyocytes via binding of the viral surface “spike” protein to the host cell receptor angiotensin, converting enzyme 2 (ACE2).

The authors say a growing number of reports have shown the presence of the SARS-CoV-2 genome in heart tissue and evidence of viral myocarditis among patients with COVID-19, including people with asymptomatic illness.

This suggests that “SARS-CoV-2 could exhibit cardiac tropism and thus directly impair cardiac function,” they write. “Myocardial infarction, arrhythmias, and heart failure are the most common cardiovascular complications observed in COVID-19 patients.”

What did the current study involve?

Now, the team has used human pluripotent stem cell-derived cardiomyocytes (hPSC-CMs) and three-dimensional engineered human heart tissues (3D-EHTs) to investigate the cardiac tropism of SARS-CoV-2 and study infected cardiomyocytes to clarify the functional changes that might underly cardiac symptoms in cases of COVID-19.

Collectively, the team concluded that hPSC-CMs express proteins that make them susceptible to SARS-CoV-2 infection. 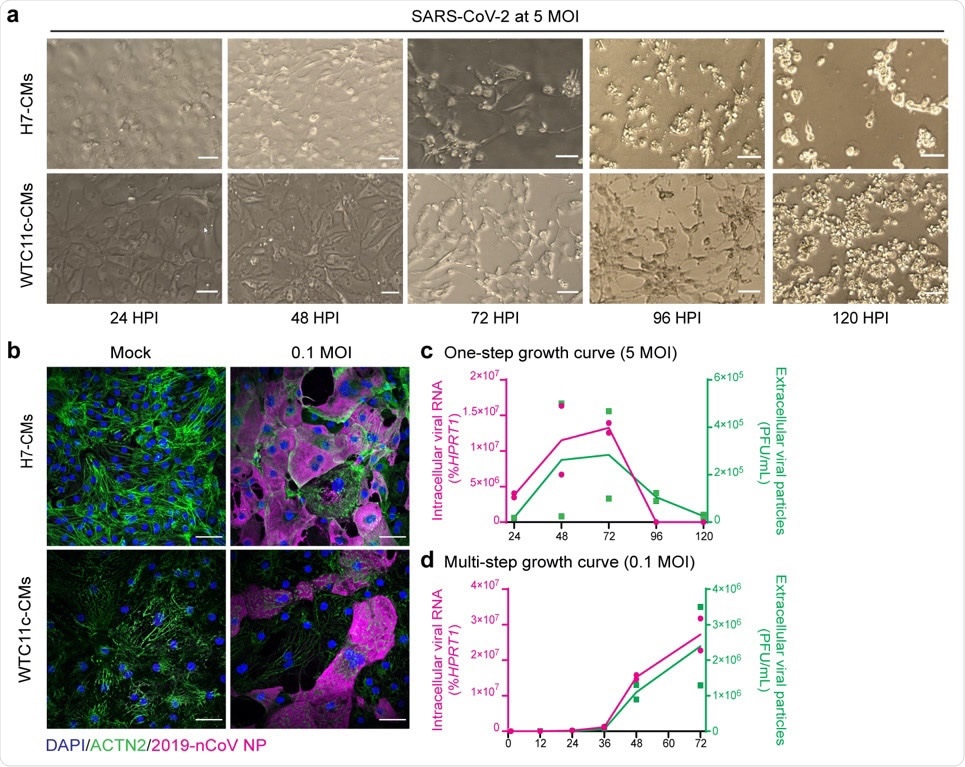 Since ACE2 expression was highest among the H7 and WTC11c-derived hPSC-CMs, the researchers tested functional susceptibility to infection in these cell lines.

They incubated highly-pure hPSC-CMs with the SARS-CoV-2/Wa-1 strain at a multiplicity of infection (MOI; the number of viable virions per cell) of either 0.1 or 5.

The team observed significant, disseminated cytopathic changes in both H7 hESC-CMs and WTC11c hiPSC-CMs, that were accelerated at 5 MOI.

Most importantly, cells stopped beating and started to die as early as 48-hours post-infection in both cell lines.

“These properties of SARS-CoV-2 infection in cardiomyocytes could explain the high rate of arrhythmia (~14%) which has been observed in COVID-19 patients,” they add.

Immunofluorescence staining revealed the substantial presence of viral factors in the cytoplasm of both cell lines, thereby confirming that SARS-CoV-2 had directly infected hPSC-CMs.

On evaluating the contractile properties of infected hPSC-CMs using 3D-EHTs, the team found that contractile behavior was significantly impaired.

The authors say this shows that the mechanical function of cardiomyocytes is impacted by SARS-CoV-2 infection and that this could contribute to whole-organ cardiac dysfunction in patients.

“These results support the hypothesis that, independent of inflammation or coagulopathy, SARS-CoV-2 can cause direct functional heart damage,” write the researchers.

“COVID-19 patients are commonly treated with steroids to control systemic inflammation. However, our data suggests that treatments aimed to control the direct damage of SARS-CoV-2, e.g. antiviral medications and/or cardioactive drugs, should also be taken into consideration to prevent long-term cardiovascular complications,” concludes the team.

bioRxiv publishes preliminary scientific reports that are not peer-reviewed and, therefore, should not be regarded as conclusive, guide clinical practice/health-related behavior, or treated as established information.